Simon Wigley, from the Department of Philosophy, has published an article in The Lancet on the relationship between democracy and population health. The study represents the first comprehensive assessment of the links between democracy, adult health and disease-specific mortality in 170 nations, spanning 46 years. Dr Wigley and his co-authors find that adult life expectancy (at age 15) improved faster in countries that transitioned to democracy compared to those that did not—increasing by an average of 3% after 10 years. In addition, they find that a nation’s democratic experience—a measure of how democratic a country has been and for how long—is more associated than GDP with the reductions in deaths in a country from cardiovascular diseases, transportation injuries, cancers, and other non-communicable diseases. They estimate that between 1995 and 2015 increases in democratic experience averted 16 million deaths from cardiovascular diseases globally. In contrast, there was no significant link between democracy and deaths from malaria, HIV, and most other infectious diseases. This is important because deaths from stroke, breast cancer and other non-communicable diseases are surging in many low and middle income nations, and will continue to grow. In addition, the global health community has focused almost exclusively on the prevention and treatment of infectious diseases, leaving local governments to tackle the rapidly growing health burden due to non-communicable diseases. 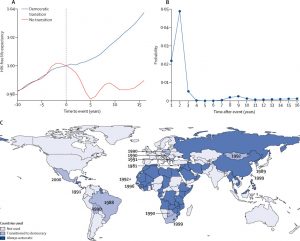 Dr Wigley’s co-authors for this interdisciplinary study are from the Council on Foreign Relations, Stanford University’s Health Policy program, and the University of Washington’s Institute for Heath Metrics and Evaluation.

The launch of the article was accompanied by an explainer by the authors in the Washington Post and an op-ed for CNN. The release of the study has been covered by the Guardian, Bloomberg, BBC World News & PBS, and other international media outlets.

A data visualization of the results of the study is available a here.

A panel discussion for the launch of the article, held at the Council on Foreign Relations, is available here.